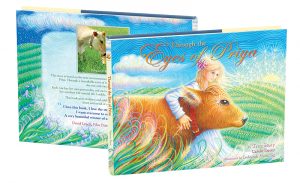 It’s not often you hold a book in your hands that feels like a gift. Through the Eyes of Priya, a picture book for children of all ages, tells the true story of Priya, an injured Jersey cow who was rescued and now lives in an idyllic dairy sanctuary. Told in Priya’s voice, the story reveals this sensitive and intelligent cow’s feelings toward the humans who rescue her. 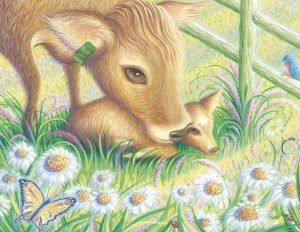 Illustration from Through the Eyes of Priya by Carol Davey, illustrated by Deborah Henning

“This is definitely Priya’s story, and I feel like she told it through me,” says author Carole Davey, a native of Australia who comes from six generations of dairy farmers and lives near the sanctuary. The luminous illustrations by artist Deborah Henning are equally magical, evoking the palpable love of the cows for their calves and their human friends in the story.

Yet this book is much more than a work of art. It’s produced by the Cows Foundation, a nonprofit dedicated to the humane treatment of cows.

Inspired by Priya’s herd, the Cows Foundation was established in 2015 to allow cows to live out their full span of life on organic pasture in an environment of kindness. Young calves are allowed to stay with their mothers to nurse for at least four to six months.

“We understand that modern dairy farmers can’t afford to keep their cows after they stop producing milk,” explains Katherine Doak, president and trustee of the Cows Foundation. “The foundation provides the knowledge of cow care and helps raise funds cow by cow so as many as possible can live out their full lives in comfort and dignity.” 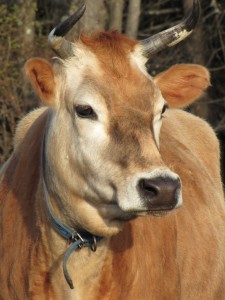 The ultimate goal is to create a financially viable farming model that fulfills all the principles of proper cow care in order to provide the purest and most nourishing milk. The foundation is also looking into the development of additional cow products used in Ayurveda. Research by the government of India, for example, shows that cow urine has anti-cancer properties.

“Today the cow is looked at only as a milk-producing machine, yet other cow products have great benefit,” says Dr. A. Thimmaiah, a sustainable development professor and trustee at the Maharishi University of Management. “When you see firsthand the love that flows between a mother and her calf,” says Katherine, “you feel motivated to support this practice of keeping the calves with their mothers as long as they are nursing, as the love and positive feelings enter the milk and nourish us in return…”

Cows have been central to ancient cultures, and they continue to be honored and celebrated in India and Nepal. Only in modern times have the ancient principles espoused by the Cows Foundation been lost. When cows are allowed to eat their natural grass diet and nurture their calves, it results in much healthier milk for the humans who drink it. A recent study published in Food Science and Nutrition, for example, found that cows fed organic grasses produced milk significantly richer in heart-healthy omega-3 and CLA.

The relationship between human life and the life of the cow is as old as time. If handled properly, this relationship can yield tremendous benefits for the overall health and happiness of our world and create a more compassionate culture for animals and humans alike.